Will you marry me? Surprise proposal almost didn’t get off the ground

A double date turned into a surprise helicopter ride and ended with a marriage proposal for Shepparton’s Samantha Zurcas. Bobby Gorcevski (who lives in Melbourne) flew Samantha to Melbourne after keeping his grand gesture a secret with lots of little white lies.

BOBBY: I asked my best mate and his wife (who also live in Melbourne) to pretend they had a wedding in Echuca months in advance so we could organise a “dinner” together in Shepparton. I thought it would be a good way to get Samantha dressed up without her getting suspicious. So I could organise the room at the Westin hotel (in Melbourne) on the Saturday, I had to get my usual soccer game in Melbourne off. I told Samantha I had to play the Friday night instead, and that night I had to pretend I was playing soccer and not talk to her until about 11 pm. I told her my soccer boots broke during the game and I needed to buy new boots on Saturday, so I wouldn’t be in Shepparton until later. When she called, I pretended I was having trouble finding my size and I had to go from one shop to another. Once in Shepparton, I told Samantha I had a flat tyre at the airport but our friends were just behind me so they were on their way to get her before getting me. This was when it could have been confusing and come unstuck, and it was overwhelming constantly telling little white lies — but luckily she didn’t catch on. When she arrived at the airport my heart was pounding. I let her stand there for a minute or two and when I walked out I saw she had her shoes in her hands, clearly not ready to go out for dinner. I told her we weren’t going out for dinner but we were going for a ride. When we finally got to the hotel balcony, I dropped to one knee and she said, “Yes of course,” before I even showed her the ring 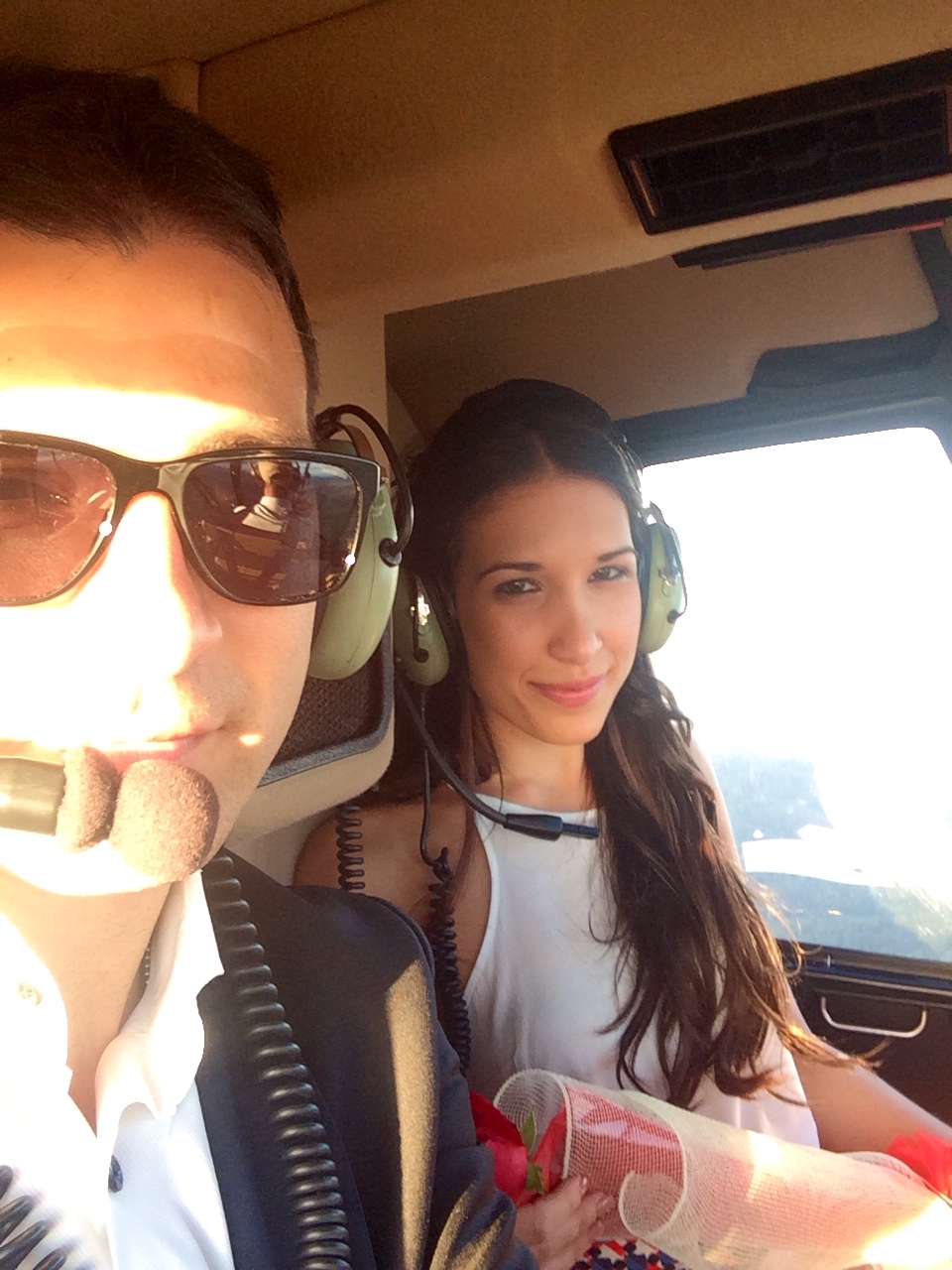 SAMANTHA: Bobby’s best friend and his wife from Melbourne had organised the four of us to have dinner on a Saturday night. Bobby also lives in Melbourne and he called and said he wouldn’t be in Shepparton until late because he needed to buy new boots. To be honest I was a bit grumpy that day — but little did I know that he was busy preparing his grand gesture. I had only just woken up from a nap when he called and said he had a flat tyre and was stranded at the Shepparton airport, but his friends were coming to get me. They rushed me out the door and I kept saying: “It’s only 5.30 pm, dinner is ages away!” Now I’ve been told I was rushed because the helicopter had to leave at a certain time due to the sunset, and if I didn’t leave the house the helicopter wouldn’t have been able to fly. When we got to the airport I couldn’t see Bobby anywhere, but when he came out of the building he was in a suit and he was holding a red rose. That’s when things started to click — like when my favourite jeans disappeared (my mum sent them down to Melbourne with other items so I would have a spare change of clothes ready). I had no idea where we were going or what we would be doing but I was suspicious. I kept looking out for writing in the sky. We then landed at the South Wharf helicopter pad in Melbourne and a private car drove us to the hotel. As I walked up the stairs there were rose petals everywhere and a bottle of champagne and Bobby proposed on the balcony. He did so well in keeping the proposal a surprise — I’m a snoop! 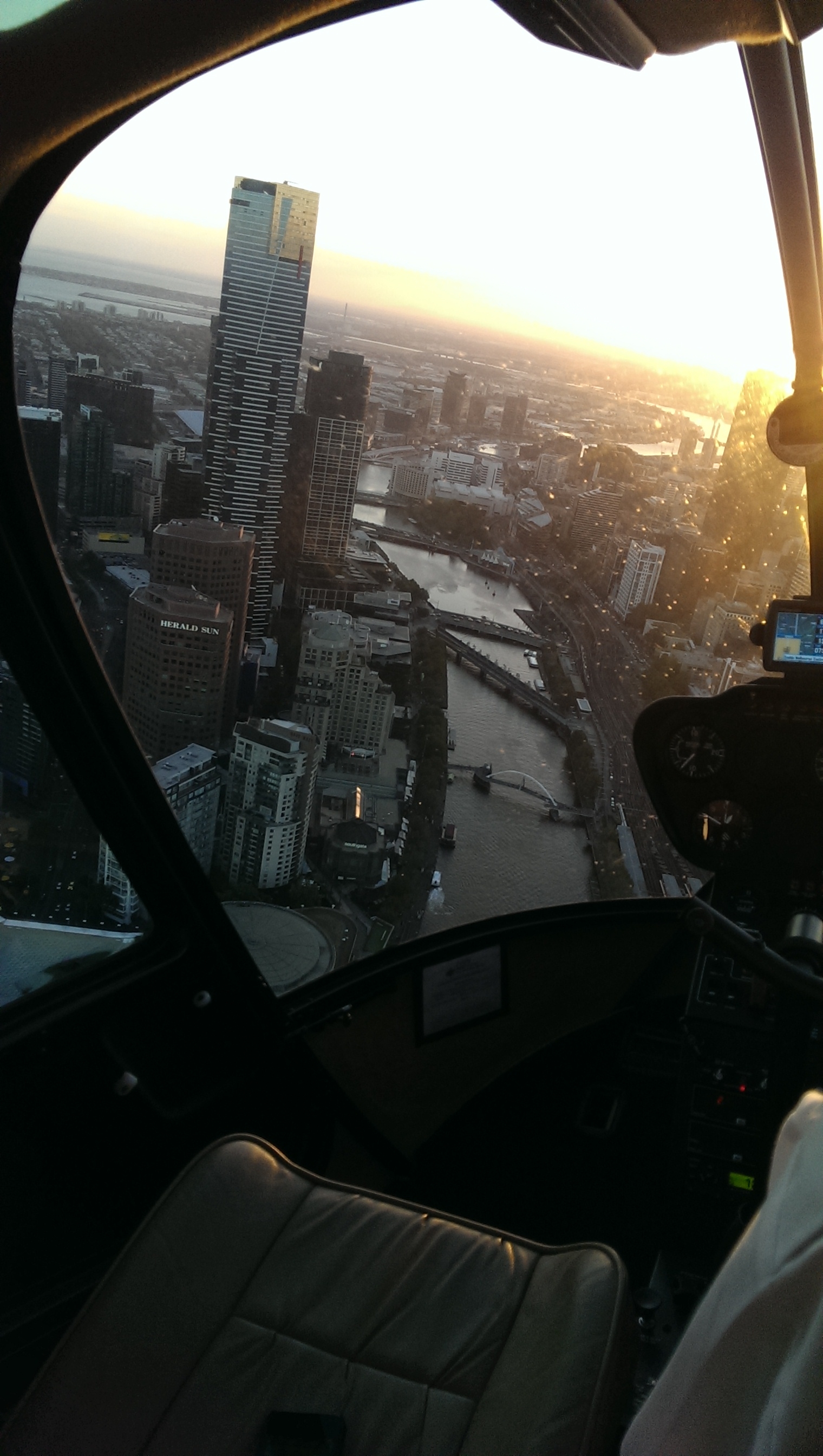